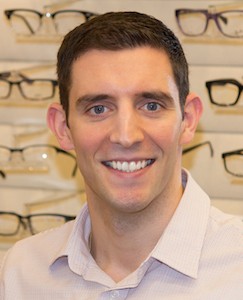 Dr. Prpic was born and raised in Richmond, BC. His undergraduate studies were at the University of British Columbia where he obtained a Bachelor of Science in Biology. He then proceeded to earn his Doctorate in Optometry from the New England College of Optometry in Boston. During his Optometric studies he was granted membership to the Beta Sigma Kappa International Optometric Honor Society for every year of attendance, awarded the Dr. Hyman R Kamens Achievement Award and became a recipient of the New England College of Optometry Presidential Medal. His clinical externship experience includes working at a Veterans Administration Hospital and Neighbourhood Health Centre in Massachusetts, an Indian Health Services Centre in Alaska, The New York Eye and Ear Infirmary in New York City and family practices in Connecticut.

Dr. Prpic feels strongly in community participation and is a member of the Continuing Education Committee of the BC Association of Optometrists and the New England College of Optometry Alumni Association.

Dr Prpic has won the “BCDO Young optometrist of the year” award in 2020.

In his spare time Dr. Prpic enjoys spending time with his family and staying active by playing soccer, snowboarding and working out. He is fluent in English and Croatian.