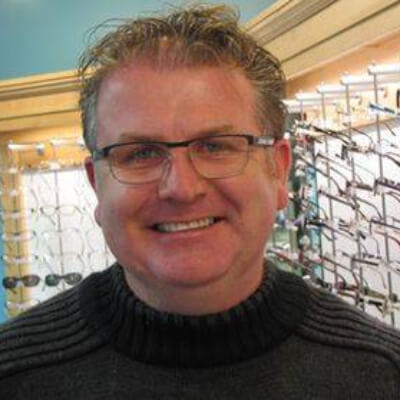 Our very own Michael Scott!!

Brian's chief ambition may be to become the next Hollywood sensation, but in the meantime, he strives to be the "World's Best Boss" in our world!

In 1991 he relocated from Scotland to Canada after becoming smitten with a tourist(he describes as a cute Canadian girl)! The warm BC sunshine was likely another draw as he often complains that back home it rains every day with the letter "a" in it.

Brian is the |jack of all trades he can be found doing almost anything at anytime....except for sitting still. He specializes in public relations, marketing, networking and keeping the boat afloat while moving in generally the right direction.

Shortly after meeting Brain you would swear that he has a BS in Communication! He is always quick with a smile and a joke and can be bribed easily with shortbread cookies or a pint(but not at the same time).

Brian and that accidental tourist(now his wife - Dr. Carrie-Lynn Snee), co-founded Doctors Eyecare Merritt/Princeton on April 1, 1993. When not at the office , he enjoys spending time with the other organization they co-founded...the 4 little Snees! His other passion, of course, is watching the Glasgow Celtics trounce the Rangers! In fact he desires that everyone share in his joy of the 'Real Football' game, that he has pledged a free pair of sunglasses to every patient when Scotland wins the cup!